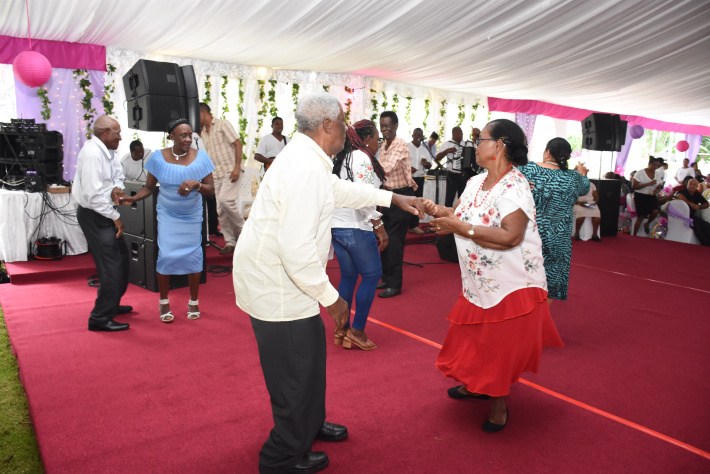 Some of the elderly showing off their dance skills

President hosts reception for the elderly

To commemorate the International Day of Older Persons, President Danny Faure yesterday hosted a reception in the State House garden which was decked out for the occasion.

Celebrated every October 1, the International Day of Older Persons is an opportunity to highlight the important contributions that older people make to society and raise awareness of the opportunities and challenges of ageing in today’s world.

The theme for this year was ‘The Journey to Age Equality’.

A number of senior citizens from all districts across Mahé, Praslin and La Digue were invited to spend an afternoon filled with entertainment with President Faure, Vice-President Vincent Meriton, their district representatives and other senior citizens.

On the occasion, President Faure remarked that it was an honour for him to welcome the senior citizens to State House since they represent the values of sacrifice, hard work, love and wisdom

“Today, on behalf of the Seychellois people, we thank you; thank you all for your hard work, for everything that you have done to change Seychelles to what it is now.”

“The younger generation, the one who is presently working, has the duty to provide our senior citizens with comfort, love, support and, more importantly, ensure that all of our senior citizens can live a life full of dignity,” President Faure concluded.

Mitcy Larue, the Minister for Family Affairs, then spoke of the various advances and initiatives being undertaken to improve the present lives of the elderly across the country and, as President Faure stressed, ensure that they are living a dignified life.

She noted that Seychelles, like most countries, is undergoing a remarkable transition where the number of elderly citizens are increasing and will keep on increasing and triple by 2050.

It is predicted that in three to four years, elderly persons, aged 63 years and above, would amount to 10% of the population in Seychelles, this would be the first time in the country’s history that its elderly population amounts 10% of its population.

“It is for this reason that we are developing a national policy with our partners that addresses the issue of ageing, so as to bring about new services and programmes that will be in the benefits of the older population,” Minister Larue stated.

“At the same time, we also reviewed the legislation for the National Elderly Council where we have put in place a new board and chief executive for the administrative tasks. In these last eight months, the council has established a good working relationship with the minister and other partners to put in place new services for the elderly,” she added.

The council has been monumental in the setting up of a help line, 2603030, and an accompanying unit to deal with situations of abuse of senior citizens in their homes or in institutions

It is currently working on a prevention programme to create public awareness on the well-being of the elderly.

“Through the national budget, the government continues to place more resources to address the care our senior citizens receives at home, in hospitals or in homes,” Minister Larue continued.

President Danny Faure had, in 2018, made a request for the private sector to invest in day care or residential facilities for the elderly and according to Minister Larue this initiative is going well.

“Land has been identified in Perseverance, Beau Vallon, Grand Anse Mahé and Baie Ste Anne and meetings have been held with various potential investors,” she explained.

The investors who will ultimately take up the projects will benefit from tax incentives, Minister Larue stressed.

Meanwhile the construction of Maison Trwazyenm Az on plot H12730 at Perseverance is in its final consultative phase and the actual construction is expected to start in 2020.

Minister Larue further noted that the measures taken to upgrade and train carers are also going well and that the survey to evaluate the needs of the elderly in regards to the care they receive from carers is being finalised.

This would in turn provide the authorities with the necessary information to conduct a thorough reform of the carer system.

Additionally, pensioners who were born before 1942 and who are not benefitting from either the Seychelles Pension Fund or the British pension, will also receive an extra R500. This will benefit 2264 pensioners at a cost of R13.06 million.

The ceremony included a sketch, songs, poems, dances and the reception ended off with entertainment by the Leve Tradisyon band. 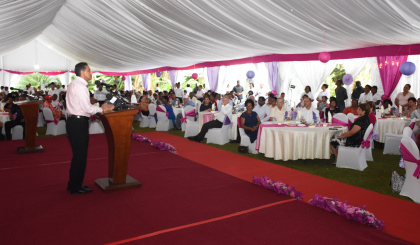