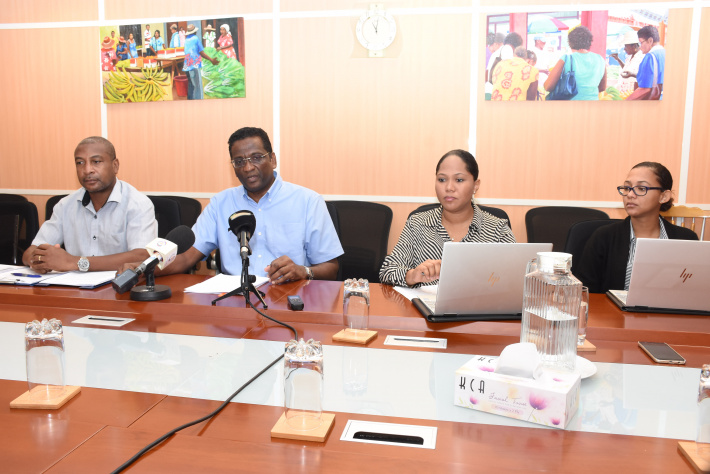 Minister Bastienne, flanked by officials from his ministry, giving details of the new agreement to the press

Following a series of negotiations on the renewal of the Sustainable Fisheries Partnership Agreement and its accompanying protocol, Seychelles has secured a total of €58.2 million, or about R902 million, in financial contribution from the European Union (EU) for the next six years.

This is an increase of more than €20 million from the financial contribution of the current six-year Fisheries Partnership Agreement which was negotiated at €30.7 million.

The new sum represents a distribution of €9.7 million or R150 million per year, of which a portion of this money goes toward enhancing the development of the artisanal and semi-artisanal fisheries sector.

The current agreement will come to an end in November this year while its corresponding protocol will expire on January 17, 2020.

The Fisheries Partnership Agreement between Seychelles and the EU, the first of which was signed in 1987, give EU fishing vessels access to Seychelles waters in exchange for financial contributions.

It establishes the principles, rules and procedures governing the economic, financial, technical, and scientific aspect of this cooperation, including conditions for EU fishing vessels gaining access to Seychelles waters, and the management, control and surveillance measures governing their activities.

The protocol however sets the number of fishing vessels allowed to fish in Seychelles, reference tonnage and annual fees to be paid by the EU, employment conditions of Seychellois seamen embarked on those vessels, and the terms and conditions the vessels have to comply with.

It is estimated that at least 20% of the tuna that are fished in the South-East Indian Ocean are caught in the Seychelles’ (EEZ) and figures from 2018 shows that of the 400,000 tonnes of tuna that were caught in this region, around 80,000 were trawled in Seychelles.

Twenty-seven EU purse seiners are currently licensed to fish in the Seychelles, although the agreement allows for a limit of 40 vessels.

Negotiations surrounding the new agreement started in August this year and the fourth and last round of negotiations was held in Brussels, Belgium on October 21.

Minister for Fisheries and Agriculture, Charles Bastienne, who was accompanied by special advisor for fisheries Roy Clarisse at the Brussels talk, stated that he was satisfied with the results of the negotiations.

He noted that Seychelles had pushed its limits, particularly in relations to the financial contribution from the EU, since the country is faced with two challenges.

These challenges are the quota on yellow-fin tuna imposed by the Indian Ocean Tuna Commission (IOTC) and the marine spatial plan (MSP) which is being implemented with the aim of segregating Seychelles’ Exclusive Economic Zone (EEZ) for various use.

Nonetheless Minister Bastienne stated that Seychelles has “found ways to improve on the agreement”.

Under the agreement, EU vessels will now be required to land in Port Victoria.

This will mostly serve the Indian Ocean Tuna (IOT) factory – which last year faced a difficult period where it struggled to operate due to a reduced supply of yellow-fin tuna – and businesses that rely on bycatch.

“EU was not required to sell its fish to IOT[…]When the situation with IOT occurred last year, the ministry had to negotiate with the vessel owners to sell the fish to IOT, but now under the new protocol we can go directly to the EU if we are faced with similar situations in the future. This is to ensure that the IOT factory or persons using bycatch are supplied with the necessary resources for them to continue to operate,” Minister Bastienne explained.

The ministry has recommended that these vessels also procure items from Seychelles as much as possible so that businesses such as shipchandlers can also benefit.

For the first time, the agreement includes joint-inspection of EU-flagged fishing vessels by the EU and the Seychelles authorities to ensure compliance.

“Seychelles is currently undertaking these inspections, but the EU was not. Now, it is a collaborative process between the two parties,” Minister Bastienne remarked.

Another notable improvement is that vessels will now have to report on the amount of fish caught within the period 24 hours, instead of three days.

This will be done through an electronic reporting and monitoring system, which will be placed on vessels inclusive of cameras, so that SFA will be able to record the amount of fish caught at any given time, even before a vessel reaches port.

“Through this we will know with certainty the amount of tuna that are caught in our water because right now we are not completely sure if only 20% of tuna are caught in our zone or more,” the minister stressed.

In the meantime EU vessels that do not take any Seychellois to work onboard, when there are Seychellois available to do so, will now have to pay a penalty of €35 for each day they are in Seychelles’ EEZ instead of €20.

Consensus was further made on ways to improve the management of fish aggregating devices (FADs), which are floating objects used by purse seiners to attract pelagic fish such as tuna.

It was agreed that these FADs will now have to be constructed with biodegradable materials to lessen the negative ecological impact of FADs and marine littering.

Minister Bastienne also revealed that the government is soon coming with a regulation that will force vessels to demarcate their FADs with a unique code.

In the same spirit, Seychelles has also been successful in obtaining around €1 million for the period of six years, or €175,000 per year, which will be put in a fund for marine clean-ups.

Discussions are ongoing to establish whether purse seiners will also contribute to this fund.

The Seychelles government has also been able to secure two scholarships to European universities for Seychellois students who want to further their education in any course relating to maritime studies.

The scholarships will be funded by the EU vessel owners that benefit from resources in the Seychelles waters.

In regards to the conditions and remunerations of Seychellois seamen, Minister Bastienne stated that Seychelles is working to rectify some vessels owners’ “misinterpretation” of the International Labour Organisation’s (ILO) minimum salary.

A delegation from his ministry will next week meet former and current seamen to help the ministry with its investigation in the matter.

Seychelles benefits further from this agreement in various other ways such as the money the Seychelles Fisheries Authority (SFA) collects from excess tonnage or Seypec receives from fuel distribution to these vessels.

Tuna exports is one of the pillars of Seychelles’ economy and 90% of the exports are sent to the EU market through a preferential trade regime.