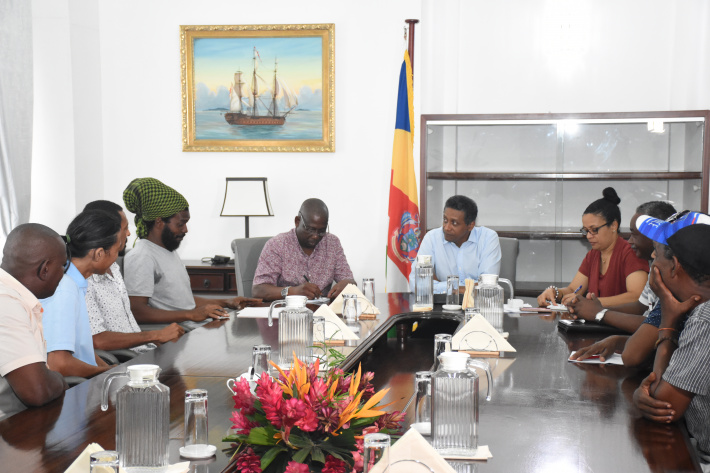 The meeting between President Faure and representatives of the stevedores committee

Representatives from the stevedores committee and Seychelles Federation of Workers Union met President Danny Faure at State House yesterday, for the first meeting since the implementation of new and improved regulations for stevedores were enforced in October.

The eight-strong group, comprising representatives from different ship-handling companies, namely, Land Marine, Seaward and Hunt Deltel, started off by thanking President Faure for setting the ball rolling towards the new regulations which provide for better working conditions, tonnage rates as well as annual gratuity on the total sum paid to them during that period of time, following their first meeting with him last year.

It must be noted the first gratuity payments were issued in June.

According to the group, they had an open and frank dialogue with President Faure and are confident that other urgent matters and recommendations forwarded by them during the meet will be acted upon and implemented for the benefit of all stevedores.

In particular, they proposed that stevedores who have been working for many years be remunerated for their dedication.

“Asides from compensation, we discussed tax and the Ile du Port Handling Services (IPHS). We would like a revision in the tax system since we work on a casual basis. It is not being implemented as we were told it would be and we propose either a revision or a tax regime for stevedoring,” Randy Azemia, a stevedore at both Hunt Deltel and Seaward and member of the stevedore committee noted.

With regard to IPHS, the stevedores propose that IPHS should have to abide by the same regulations as the other three shipping agents that operate under local jurisdiction to eliminate the unfair advantage which it has over its competitors and towards improved conditions for Seychellois stevedores who work for the company, which falls outside of Seychelles’ jurisdiction.

“IPHS is in Victoria, Seychelles, but does not operate by Seychelles’ laws. Lately, IPHS gets the majority percentage of vessels which means that the other companies who were sustaining the economy all those years before, are losing out,” explained Mr Azemia.

“At IPHS, there are Seychellois, foreigners and prisoners and we are in favour of prisoners working but we do not feel that the conditions that they are being made to work is right so we feel that needs looking into,” Mr Azemia stated.

Secretary general of the Seychelles Federation of Workers Union (SFWU) Antoine Robinson added that the union is satisfied with the new regulations and will keep pushing forth the concerns of stevedores, counting it as an achievement that they convinced stevedores to form a committee to be the voice of the industry.

Mr Robinson ended by stating that he is confident their suggestions will bear fruit.