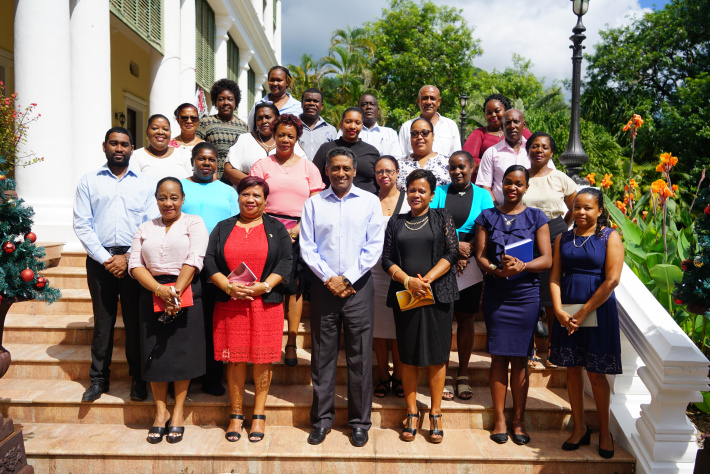 The DAs in a souvenir photograph with President Faure (Photo source : Office of the President)

The meeting forms part of the President’s routine consultation with public servants, providing a platform for them to openly discuss work in their respective districts, raise pertinent issues and challenges, as well as make suggestions of possible solutions moving forward.

The President opened discussions by reviewing the noble work of district administrators, which he described as ‘the face of government in all communities’, a service he emphasised should be delivered in line with the fundamental principles of transparency, accountability and good governance.

During the meeting, the DAs also had the opportunity to suggest changes that would make a difference in their respective districts.

Some of the key points discussed during the meeting included schemes of service, respect and understanding of their role, social ills, communication between ministries, departments and agencies, budget constraints, and student engagement.

President Faure also availed of the opportunity to express appreciation on behalf of government for all the good work being done by district administrators, and how despite the challenges, they continue to remain focused in ensuring a service is delivered.