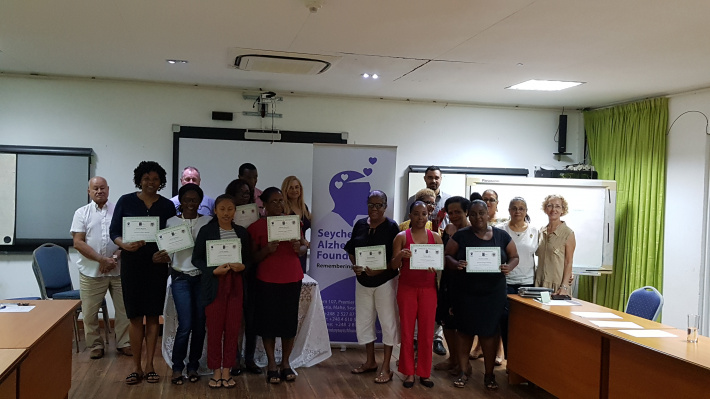 Adamant on its mission to train caregivers on how to take care of Alzheimer sufferers, the Seychelles Alzheimer's Foundation presented certificates to nine caregivers on Saturday February 29, at the Exiles Club of Cable & Wireless.

Certified by the University of Washington and the Commune of Umeä, Sweden, the course ran over six weeks, for two hours a week on Saturday mornings.  It was taught by three local trainers, Anne Marie Vel, Geralda Charlette and Jonathan Matile, all of whom were trained in Sweden in September last year.

The previous year, in 2018, a delegation consisting of some Ministry of Health officials and Seychelles Alzheimer's Foundation (SAF) members had also visited elderly home facilities in Sweden. Both the SAF and MOH have received a lot of help from the Commune of Umeå, through the support of Consul General Lennart Swenson.

Effective communication with Alzheimer sufferers, personal hygiene, nutrition, national values and exercise and safety were a few of the many topics covered on the course.

A guest speaker, Dr Rodrigues Lezcano, also looked at the medication aspect of the disease.
Present at the graduation were Dame Lise Church, the founder and chairperson of SAF, Gerald Kiwale, acting director general of the social affairs department, SAF trustee from MMI Seyvine, Richard Townsend as well as members of the foundation.

As Dame Lise Church pointed out in her speech, “...anyone over the age of 65 can get Alzheimer's, and although it's not curable right now, it can be managed. With proper care, the lives of the sufferers and caregivers will not be such a hardship as it is now. This is why SAF insists on the education and training of caregivers and the population at large.”

A few years ago, Mrs Church continued, “Alzheimer's was a taboo subject and was very much misunderstood. Now, however, because of the work that the foundation has been doing, people are talking much more openly about it. It is obvious that we wouldn't be able to do what we are doing without the help of our benefactors, trustees, sponsors and the National Grants Committee as well as the Commune of Umeå in Sweden. We are profoundly grateful to all of them.”
“The SAF vision is to open the first sustainable and functional memory care home in the country and it is hoping that the government will accept that there is indeed a need for such an establishment and will take firm steps in making it happen.
The graduates on the course expressed deep gratitude towards SAF and have vowed to continue the commendable work that the foundation is doing,” Dame Church said.

The SAF is planning to run a similar course several times during the year, with the next one being in April 2020. As well as that, it will also try to go out to the districts and to local homes so as to visit and support families who are taking care of Alzheimer sufferers.  Members of the public who are interested in attending a course, the support group meetings or would like a member of the foundation to visit them in their home can call the helpline number 2817878.