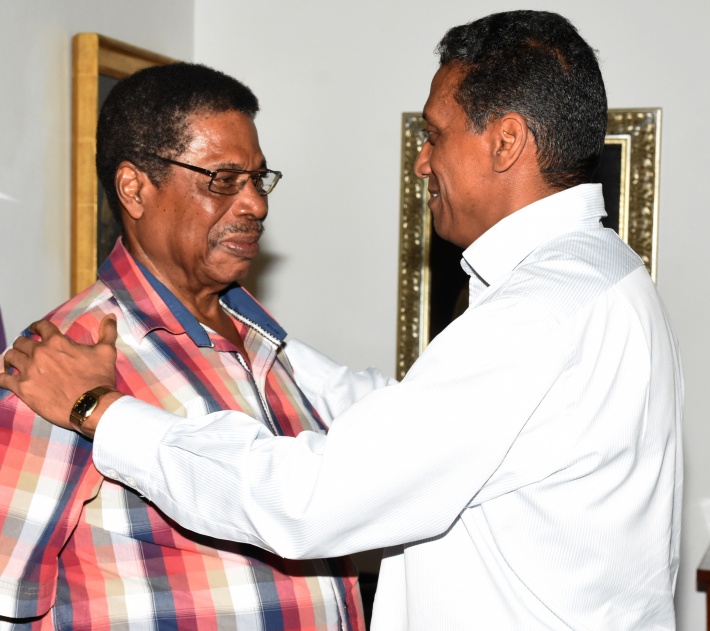 Despite his poor health, Mr Philoe expressed his happiness upon meeting the President.

David Philoe emerged as a new talented artist at the age of 20 and his musical career spans a period of over 52 years.

Mr Philoe is still a well known voice today and has produced many songs which have been remixed into modern versions.

Last Friday, a concert was organised at the mini-stadium in Victoria to honour this veteran singer.

After the meeting with President Faure yesterday, Mr Philoe had a few words with the press and said he was happy that the President acknowledged him and his contribution to the Creole music.

“Following the concert last week, I feel very happy that I still have a lot of supporters and I thank my fans. I have been singing for the past 52 years and I have been through ups and downs. I sang for football clubs and also for free. I sang for Seychelles and about Seychelles in other countries.

“While visiting a country, a President of that country asked me to interpret the ‘Malaika’ song in Creole. I also urge the youth to think about God and to compose songs about Him. He will never abandon you,” noted Mr Philoe.

President Faure thanked Mr Philoe for his contribution towards creating Creole songs and music and qualified him as ‘a veteran musical icon’.

He also talked about how the work of Mr Philoe has influenced the society.

The President and the singer had a conversation on the current situation of the music industry in Seychelles and encouraged the youth to keep creating music by including our culture.

The latest album of Mr Philoe was ‘Lalyans Des Zil' (Sega De Seychelles) which came out in March 2011. His songs are all about the reality of life and in many instances the sufferings of the past.

Mr Philoe also has gospel numbers which are well known among his religious followers.

David Philoe has retired from the musical sphere because of illness.

For this visit, the veteran singer was accompanied by his wife Sheila and son Derrick Philoe.