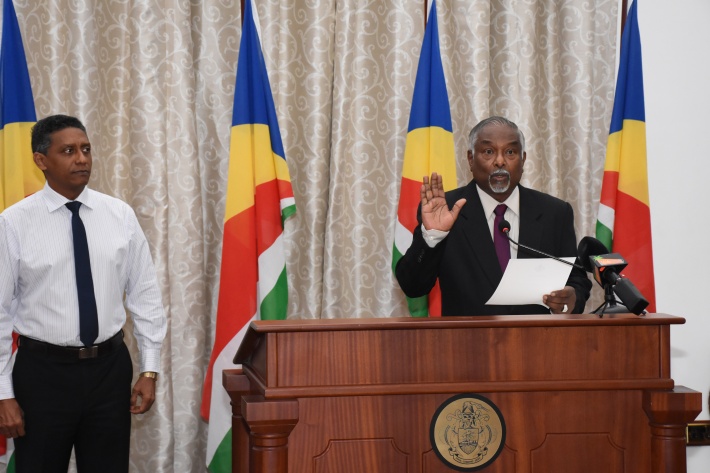 Justice Bernardin Renaud was sworn in before President Danny Faure yesterday as chairman of the Seychelles Human Rights Commission.

The ceremony took place at State House in the presence of Vice-President Vincent Meriton, Designated Minister Macsuzy Mondon, Ombudsman Nichole Tirant-Ghérardi, chairman of the Constitutional Appointments Authority (CAA) Michel Felix, secretary of state for Cabinet Affairs Mohamed Afif, principal secretaries, and senior representatives in the Office of the President, other members of the commission and those of CAA.

In March this year four members including the deputy chairperson of the commission, Michelle Lacoudraye-Harter, were sworn in. Justice Bernardin Renaud was appointed as the chairperson designate of the commission despite serving as Justice of the Seychelles Court of Appeal. He took his retirement in May this year.

President Faure has appointed the chairperson and members of the Seychelles Human Rights Commission after consulting with the Speaker of the National Assembly Nicolas Prea and from candidates proposed by the Constitutional Appointments Authority as prescribed in Paragraph 5(1) of the Seychelles Human Rights Commission Act 2018.

Judge Renaud is one of the longest serving public officers. He joined the civil service in 1965 and later served as Labour Commissioner from 1979 to 1985.

Judge Renaud played a key role in the transition of Seychelles from a One Party State to a pluralistic system when he chaired the meetings of Constitutional Commission that laid out the foundations for the Constitution of the Third Republic. He was the director of Elections for the Referendum that approved the Constitution, as well as for the first Presidential and National Assembly elections in 1993.

Judge Renaud was also sworn in as the first Ombudsman of the Republic of Seychelles in November 1993. He was elevated as Judge of the Supreme Court in January 2004 and then served as Justice of the Seychelles Court of Appeal from May 2017 until his retirement in May this year.

Speaking to the press, Justice Renaud said that personally he views the objective of the commission as to strive to give life to the words of the local, regional and international charter so that Seychelles comes out as a country where human rights is high on the agenda thus resulting of us being highly respected.

“Once we have this, I believe that the world will look at Seychelles with a different eye when it comes to the question of investment, of visitors coming here; especially that we have a tourism industry. So a high level of human rights as per our charter and international obligations will help greatly in the economic aspect of Seychelles,” Justice Renaud said.

He noted that anything we speak or refer to in future about human rights must be quoted from our constitution and from the charter as it is from there that causes Seychelles to move on.

“Any decision taken must be in accordance with the constitution or in reference to the charter, this is my view for the future,” Judge Renuad added.