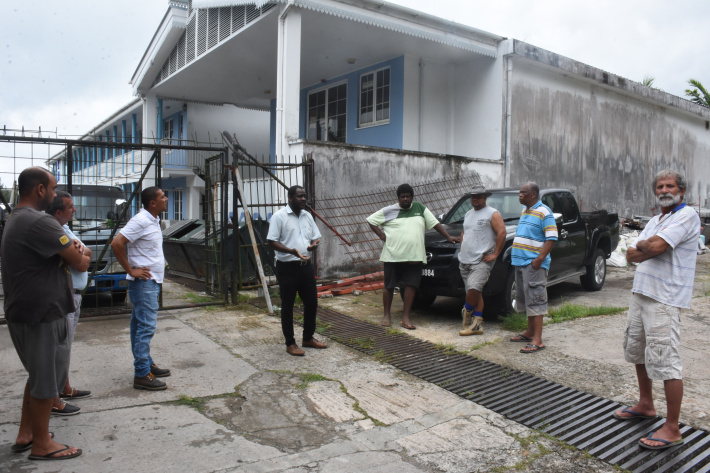 A group of butchers, accompanied by some livestock farmers, yesterday morning manifested their frustration against FEROX multispecies abattoir for refusing to slaughter their pigs.

They did so by blocking the abattoir’s entrance at Le Rocher with their pick-up trucks loaded with pigs.

The company had requested that they pay the full amount of R500 per pig, as of November 2, 2020, for the animals to be slaughtered, something the butchers had refused to do as they claimed they were being subsidised for the extra R300, for the service, by government.

The new procedure, as requested by the company, was forwarded to the butchers and the livestock farmers in a letter dated October 27, 2020, informing them that it was now mandatory that the full amount of R500 per head (of pigs) is paid to the abattoir at the time of booking for the slaughter of pigs.

It also notified that it will no longer be collecting subsidy on their behalf as it will be now their responsibility to apply for such with the Ministry of Fisheries and Agriculture.

It also informed them to ensure that they get a receipt, signed by the abattoir manager, once payment is made, on which it should include the amount and method of payment, the date for slaughtering and the number of pigs to be slaughtered that day.

It added that the FEROX abattoir will no longer accept pigs for slaughter without the presentation of such a receipt upon delivery of animals. This also includes the slaughtering of chicken which is now R7 as upfront payment per head instead of the R3 per head.

The butchers on their part claimed that the company wants them to pay in full and for them to go find extra money owned to them from government, which they said is not acceptable.

“I think they should sort out their issues, if they have, with government and not with us,” said Gorg Haffner from Haffner’s Products. He is a butcher that sells his products at STC hypermarket. He and his other colleagues had been at the abattoir since 6am. He claimed that they got in touch with the ministry upon receiving the letter but they got no response.

“So as we were booked for today, we came for our animals to be slaughtered,” he said, noting that they didn’t get to see the abattoir’s management and if they pay the extra subsidy this will increase the price of their products.

Dr Barry Nourrice, chairman of the Agricultural Producers’ Association of Seychelles (Apas), who was present on scene to calm the situation, said that it was only yesterday that he learned of FEROX’s new procedures. He claimed that a subsidy backlog may have contributed for the company to introduce the new measure which regrettably is not in the benefit of the butchers and livestock farmers.

According to the principal secretary for agriculture, Antoine-Marie Moustache, the subsidy policy on the slaughtering of pigs and chickens which dates back since 2018 and expires on December 31, 2020, does not include butchers but rather the livestock producers.

He said that it’s the producers who benefit from the subsidy and not the butchers even though they (the butchers) bring in pigs to be slaughtered in the name of the producers and pay only the R200 fee.

He said that the ministry does not owe money as such to FEROX but rather the paying procedure which is a bit lengthy and negotiation is underway to settle all outstanding subsidies due to it.

He noted that the ministry has taken the decision to effect payment with regard to subsidy transactions with FEROX with 8 days rather than the original three weeks that it was originally taken.

PS Moustache said that all negotiations will include only the registered producers and not the butchers as they are not mentioned in the policy. The butchers will have to find other means to retrieve the extra money paid or else collect or buy the pigs from the producers after they have been slaughtered.

It is the Seychelles Agricultural Agency (SAA) that monitors the slaughtering of animals and collect data for payment by the Ministry of Finance.

Dr Nourrice later said that through negotiation with the FEROX management, it has agreed to take in the pigs for slaughtering today at the subsidy prize of R200 while a meeting has also been scheduled today with the management for further explanation on the reason for the upfront payment.