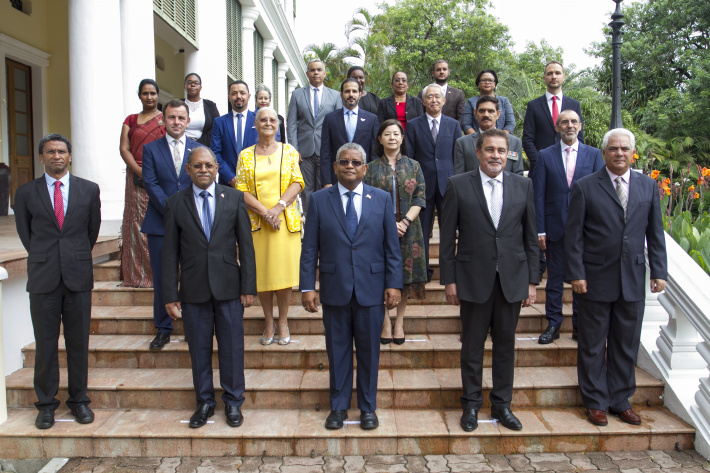 A souvenir photograph after the meeting (Photo source: State House)

‘Seychelles will continue to count on your support’

President Wavel Ramkalawan yesterday met all resident members of the diplomatic corps at State House, reassuring them that Seychelles will continue to count on the support of the countries they represent.

President Ramkalawan right on the outset thanked the representatives of the various countries in these words: “The Seychellois people owe each one of the countries and governments that you represent a debt of gratitude and deep appreciation for the support that you have given Seychelles over the years, and more particularly during this unprecedented and challenging times that we are all going through. I also wish to express our appreciation to those countries that are funding the multilateral institutions that are finding ways to mitigate the effects of the Covid-19 virus. I urge everyone to continue their support, as indeed I seek the support of other multilateral institutions such as the Commonwealth, l’Organisation Internationale de la Francophonie, the UN Agencies, and many others, as small states like Seychelles benefit greatly from these organisations.”

President Ramkalawan further declared that he and his government remain committed to furthering and deepening relations with the countries represented here today, as indeed with the wider international community.

“My government remains similarly keen to explore all avenues of cooperation with friends and partners for our mutual benefits. We need to continue working together on common challenges such as those relating to climate change, the environment, the fight against organised crimes including drugs, arms, terrorism and human trafficking, to name but a few. Practical support to Seychelles in dealing with maritime threats, including blue crimes, which will effectively boost our maritime security through capacity building of our law enforcement agencies, remain vital and we hope that these are further enhanced.”

Among the key foreign policy priorities are: obtaining necessary financial resources to assist our recovery from the pandemic; Renegotiating our foreign debt obligations; Engaging with international development partners to fund new initiatives to boost economic activity and Sourcing assistance for Seychelles adaptation to threats from climate change, among others, while being fully engaged in protecting our environment.

President Ramkalawan also asserted that there is a continuous need for capacity building in all sectors of our economy.

“We hope that we can continue to look to you for support in this. The Covid-19 pandemic is hitting all countries very hard. However, it is a well-known fact that small island developing states (Sids) like Seychelles, with their extremely limited resource base and high degree of economic openness, are being hit the hardest. Seychelles’ economic outlook is, to be brutally frank, dire.”

Speaking about his announcement made during his address to the National Assembly last Tuesday to close three overseas diplomatic posts, the Head of State noted that “It is clear that, for the foreseeable future, Seychelles will be unable to maintain its currently 11 overseas diplomatic posts. We are compelled to suspend three of them by the end of the year: These are our embassies in Havana, Cuba and Colombo, Sri Lanka, as well as our representation office to the UN agencies in Geneva. I wish to assure His Excellency the Ambassador of Cuba and the Acting High Commissioner of Sri Lanka that this has been a very difficult decision but one that needed to be taken in the current difficult circumstances the country finds itself.”

The President also thanked ‘les pays amis dans la langue de Molière’.« I particularly appreciated the various support that you have given to our national structures for managing the health crisis, in particular with beautiful gestures of humanity and extraordinary solidarity. I want you all to be thanked for that. Thank you for coming together to follow our recent presidential and legislative elections. Your presence as observers helped to strengthen the credibility and transparency of these ballots. I am, in this regard, very grateful for the very kind words, the congratulations and the best wishes you sent me after my victory.”

President Ramkalawan concluded his speech by stating that “Over the years, Seychelles has made progress in many areas, including improving the socio-economic conditions of our people, in maritime security, the blue economy, environmental protection, and responsiveness towards our international obligations. Our country has consistently recorded a high level of development indicators and, in some particular instances related to a small island state, was considered a model for the rest of the world. We recognise that our success is partly due to the generosity, support, and solidarity of our global partners and for making judicious use of the assistance we have received. The hard work that we have put into building this nation and the achievements gained are today being threatened by the fallout from this pandemic which also compounds existing challenges like climate change that we are grappling with as it diverts resources from pressing priorities. Faced with this sudden and unprecedented global crisis and its attendant economic meltdown, our vulnerabilities have worsened. More than ever, we need the support of the international community to sustain our achievements.”

After the meeting, Minister for Foreign Affairs and Tourism, Sylvestre Radegonde, met the press for a small chat. “The objective of this meeting is for President Ramkalawan talk to the international committee and share with them his political orientation in regards to external affairs of the country. He also thanked them for their cooperation and support since our independence. This new government wants to pursue this relationship and have a win-win partnership. The ambassadors and high commissioners expressed their satisfaction with this meeting as in big countries, they do not get the same opportunity and they also congratulated President Ramkalawan and former President Danny Faure for such a wonderful transition of power. Our democracy is solid and this was started by the way former President Faure led the country. He calmed the population a lot and we saw the result of that. ”

Talking about the resignation of Ambassador David Pierre and others, Minister Radegonde explained that “all ministers received instructions from President Ramkalawan not to sack anyone from their current posts. As an ambassador myself, I personally called all my colleagues, mainly those who had a reason to be worried. I told them, the past is the past and let us find out ways to work together and I would like all of you to stay. Many of them have the know-how and still have a lot to contribute. Some of them accepted while others decided otherwise. In the case of Ambassador Barry Faure, I implored him to stay as he is a hard worker and his heart is in his work. But unfortunately he already made the decision to leave the office prior to the elections due to personal issues. Two weeks ago, I spoke to Ambassador Pierre and reassured him the same but I still received his letter of resignation yesterday. I respect his decision. I want to point out that there was no pressure on anyone to leave their post!” 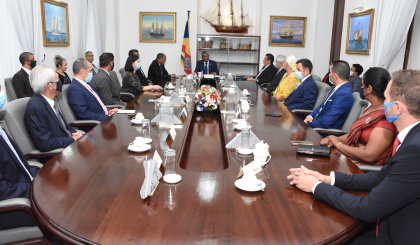