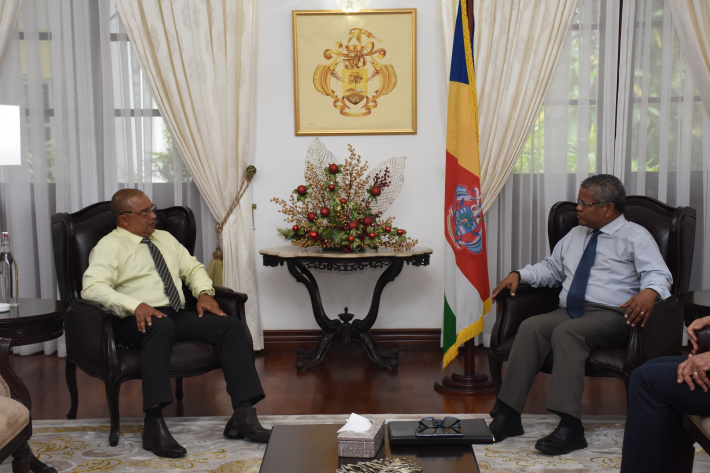 Ambassador Esparon had been serving in different countries.

The discussions held between President Ramkalawan and Ambassador Esparon focused on the work that he had been doing in his capacity as secretary of state for poverty alleviation and also in his different assignments as ambassador.

On behalf of the people of Seychelles, President Ramkalawan conveyed his sincere appreciation to Ambassador Esparon for the invaluable contributions he has made in his various capacities. He also expressed hope, that despite his departure from the public service he will continue to contribute to the country.

"As a Seychellois with immense potential, I am convinced that whatever path you choose for the future, you will indeed continue to make important contributions towards the building of our nation. I would like to express my sincere gratitude to you for your dedication during your many years of service to the people. As you embark on your new journey, my door remains open should you wish to extend your support and knowledge for the greater good of our country,” said President Ramkalawan.

Speaking to the press after the meeting, Ambassador Esparon noted that “the President took note of the various contributions I made in the different countries as ambassadors. After the introduction of multi-party politics in Seychelles, I was among the youngest to be elected as member of the National Assembly in 1993 and I completed three terms. After that, I was appointed director general for youth, then director general for culture, secretary of state for poverty alleviation and ambassador”.

Explaining why he resigned as ambassador, Mr Esparon stated that “there is a time for everything, a time to sow a time to reap. It is also a time for me to step back and see what the future holds for me and look at different opportunities as it is an interesting time for Seychelles. I have to see as an individual what can I do for the benefit of Seychelles”.

Asked if he has received any offer for a different position, Ambassador Esparon stated that he will not comment.

“I am still young and I have a lot to give back to my country. We will see what the new reality brings in another dimension. I feel that I have been in a static position for some time and need to look further,” added Mr Esparon.

As an ambassador, Mr Esparon opened the first embassy for Seychelles in India and also in the United Arab Emirates (UAE).

“We had excellent relations with these countries where we were both in a win-win situation. Many people do not understand that a diplomatic relationship needs nurturing and investment. For me, now Seychelles has to engage with the world in order to come out of the situation we are in and at regional level, we should try to have a strong bond so that the world can hear our voice,” explained Mr Esparon.

In conclusion, Ambassador Esparon noted that “no matter what political philosophy you follow, it is high time for each one of us to see how we can support our country and make a better Seychelles. I would not like to hold a post in government and not find something that will push Seychelles forward”.

Mr Esparon was appointed as Ambassador Extraordinary and Plenipotentiary in July 2017 and was accredited as Seychelles’ first resident High Commissioner to Delhi in February 2018. He was in post for three years until his appointment as resident Ambassador to the United Arab Emirates, a post he held before being appointed as secretary of state for poverty alleviation in 2016. He subsequently re-joined foreign affairs in 2019 in his capacity of an ambassador Extraordinary and Plenipotentiary and earlier this year was appointed Ambassador to the Indian Ocean countries.

Mr Esparon is the younger brother of Foreign Affairs and Tourism Minister Sylvestre Radegonde who accompanied him to State House.