School has started but education ministry lags behind |20 January 2021 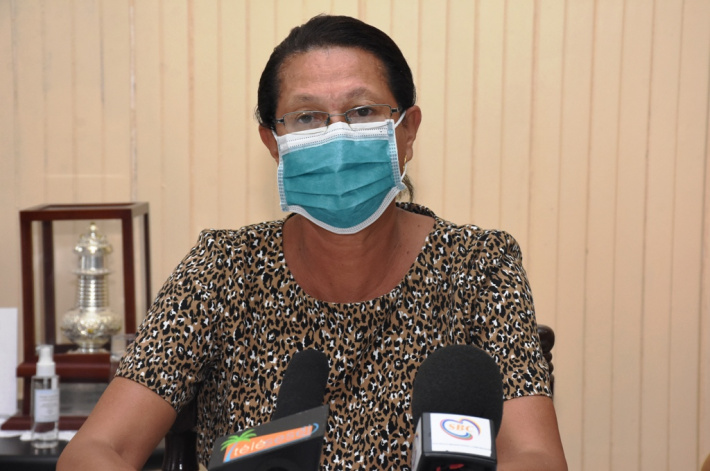 Yesterday was the second day in what the Ministry of Education has described as an “extraordinary” new school year for crèche, primary and secondary students.

Yet the Ministry of Education and public schools are lagging behind with remote and virtual learning.

Instead, this week, students at home are getting repetitions of programmes that were recorded during the last restriction of movement period last year and some TV spots focusing on school behavioural policies, study options for secondary students and repetitions of a quiz show.

Principal secretary for early childhood, primary and secondary education, Dr Odile Decommarmond, explained that the ministry is presently working on recording new lessons for students, and those will be broadcasted on SBC and TéleSesel as from next week.

“The lessons should start on Monday [Jan. 25] and broadcasted throughout until the Ministry of Health gives the green light for schools to open again,” she explained.

“For this week, we will broadcast lessons that were recorded last year but that had yet to be televised or those that are still relevant, as we continue to finalise the programmes for next week. This means that students will get the programmes covering the first term topics by next week.”

It is to be noted that the ministry is also still working to compile a list of topics that are to be covered in term one this year, for different levels. This is expected to be made available via its website and in the national newspaper.

“When teachers will be presenting the lessons on TV, they will also provide a summary of the topic so that parents can seek out some additional resources and better help their children during home schooling,” added PS Decommarmond.

PS Decommarmond explained that the ministry’s website still has some worksheets and contents that were made available last year, and is again working to update the website with resources for the 2021 school year.

A simple click on the website’s e-learning portal yesterday afternoon revealed that there are yet to be any uploads of educational resources for this year for primary schools while only resources for English had been uploaded for secondary schools.

The principal secretary did not provide an exact date for when all of these resources, in addition to the list of topics, would be uploaded in their totality.

To note, the Ministry of Education has provided a catalogue of online educational resources, in the forms of YouTube Channels and website links, which parents and students can access for revision, additional reading and learning purposes.

It is unclear why the Ministry of Education seems to be slow-going with these programmes or in providing online resources, given that the delay in the opening of schools should not have come at any surprise to anyone.

With experience gained in April 2020, during the first lockdown, one would have assumed that the ministry would have been geared to go as soon as the 2021 school year had resumed on Monday January 18.

Instead of a streamlined method of bringing classroom learning at home, the Ministry of Education is providing a hodge-podge system wherein some parents are getting hold of resources through some social media groups, or through other means if they are lucky to have some teacher friends, while others are to be left in the dark until the ministry or the schools sort themselves out.

Some schools such as Plaisance primary have also uploaded resources for parents to print on their Facebook page.

Meanwhile some private schools had already started remote and virtual learning a few weeks before the new school year, with parents and students provided with adequate resources and regular interactions with their teachers via Zoom calls or Google Classrooms.

Although it is often unfair to compare private schools to the public education system, the shocking unpreparedness for the new school year from the latter has nothing to do with lack of resources but rather the untimely delivery of these resources.

On her part PS Decommarmond noted: “We know that there are teachers who are conducting classes through Google Classrooms and lessons being given to students, particularly those in upper secondary level who are following IGCSE courses […] some primary schools are also setting up their WhatsApp groups.”

“Teachers should be working right now, so if they feel they are missing some resources they can pick these up at the schools so as to ensure they have everything prepared for when school resumes properly,” continued PS Decommarmond.

“On our side, we are in contact with all head teachers and exchanging information and ensuring that they stay in constant contacts with their teachers.”

She explained that the ministry is putting emphasis on teachers communicating regularly with their students and parents.

With children moving from one level to another and most changing teachers, PS Decommarmond said that the schools are expected to prepare for the next school year and assign teachers with their new students and their contact details.

But given these changes it is unclear how parents, who have no clue who their children’s new teachers are, should be able to reach out to them. Many parents have yet to be contacted by the schools or teachers.

A parent whose daughter is changing primary schools this year and son is graduating to secondary school expressed that she is confused as to what to do and whom to contact.

Additionally it would seem that most schools did not have any administrative staff working yesterday, or if they were they were certainly not picking up the telephone.

Unfortunately phone calls to some school lines yesterday either went unanswered or were re-routed to a ministry official who, in our case, was unable to get us into contact with anyone at the school we had placed the call to.

This current restriction period does not mean that everyone should stay at home so it is baffling that there are no school staff members manning the telephones for incoming calls from understandably concerned parents.

As for at-home students with no or limited internet connection, PS Decommarmond has urged them to get in contact with their teachers to see how they can access physical resources and also to rely on the televised classes.

Integration of instructional technology in our educational system: the debate is on! |06.05.2021

Online training for Master Trainers in Robotics and Artificial Intelligence |04.05.2021