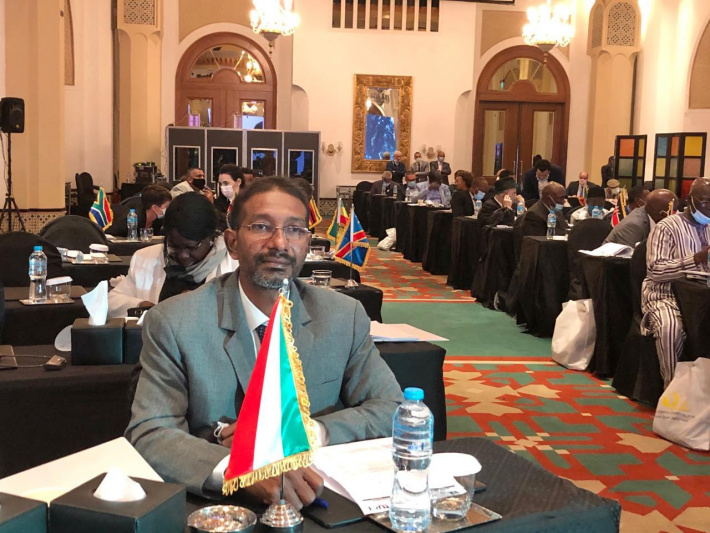 Seychellois Lucas Georges at the meeting. He is the Candidate of Africa on the UCI management committee

During the Confédération Africaine de Cyclisme (Cac) elective congress, Mr Georges was elected as the Candidate of Africa at the Union Cycliste Internationale (UCI) management committee.

In a letter addressed to former cyclist Georges, who is the Seychelles Cycling Federation chairman, Cac president Mohamed Wagih Azzam, who is also the UCI vice-president, wrote: “I would like to congratulate you on your election as Candidate of Africa at the Union Cycliste Internationale (UCI) management committee, which marks the confidence placed in you by the entire African family and that you are worthy to represent the African continents at the UCI.

“With all the best wishes for success in your mission, especially at the next congress to be held in Belgium.”

Speaking to Sports NATION, Georges said: “It is the years of experience and the level of duties that you deliver to Africa and the world which gives countries confidence to nominate and later vote for you for such a position, especially when you come from a country with no finances to back you up in a strong campaign.

“I believe that God has been on my side. Last year following the outbreak of Covid-19 I said I would give up the sport as I had been away from the international events for more than 12 months, but when you have done good things and implemented a high level of sport administration, you earn the respect of administrators from foreign countries. They respect you, value your work and always look for your advice. I got a call from a Ghana representative requesting that I take the challenge and that West Africa had already started campaigning for me. For a moment I hesitated but after representatives from other countries contacted me for the same purpose I took on the challenge. It was very difficult to make the move financially from the beginning but with help of others all went well. I arrived in Cairo a day prior to the congress and the night before certain people wanted me to join in a campaign meeting, but because I was tired and also not wanting to join large groups to avoid contracting the Covid-19, I refused to join them. Also I did not have any gift to give out except for my experience and knowledge. I told them I believed many countries know my ability and if they were to vote for me they would do. I stayed in my room and prepared my presentation for the deliberation.

“On Sunday I was voted as one of the two Africans who will represent Africa within UCI. It’s an honour for me and Seychelles for I can facilitate many things at both administrative and technical levels. The continent of Africa has shown its trust in me and soon I will be given duties to be responsible of international competitions and games. So far, I have been in charge of two All-Africa Games in Zimbabwe as chief commissar and in Morocco as Cac technical representative and also Cac representative where I had over 300 people working under my direction.”

Georges added: “As representative for Africa, I have also been nominated to become a board member of UCI and this will take place in the congress in Belgium in September. There are 19 candidates from around the world for five posts. It won’t be easy but not impossible. For now I will bring my influence to help my country in any way I can. I would also like to thank all the people who have helped to make me the leader I am today. They are Hughes Adam, Giovanna Rousseau, Michel Thèze, Charlie Watts, Heinz Verbruggen and others as the list is long.”

Other than the election of Cac candidates in the UCI, elections were also held for the posts of Cac president (only one candidate), management committee members (15 candidates), voting delegates and the auditor (one candidate).

The Cac is the grouping of national cycling federations on the African continent that are members of the UCI.

Its main objectives are to promote and develop all forms of cycling in Africa, facilitate contacts between its member federations and the UCI as well as participation of its member federations in the running of the UCI, defend the interests of the continent and the African federations at the UCI and, in consultation with the UCI, at other international sporting authorities, facilitate understanding, co-operation and mutual assistance with all international sporting authorities, promote sporting ethics in general and those of cycling in particular and to combat any form of racial, political or religious discrimination and other forms of discrimination throughout the sporting movement on the continent.

As for the UCI, it is the world governing body for the sport of cycling and runs oversees international competitive cycling events. It is based in Aigle, Switzerland.

The UCI issues racing licenses to riders and enforces disciplinary rules, such as in matters of doping.

It also manages the classification of races and the points ranking system in various cycling disciplines including road and track cycling, mountain biking and BMX, for both men and women, amateur and professional. It also oversees the world championships.