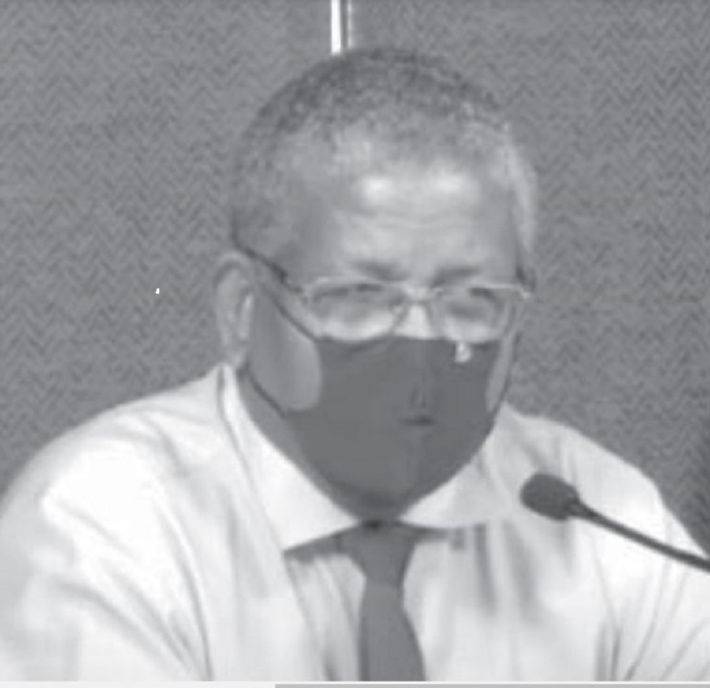 President Wavel Ramkalawan yesterday appeared before the Truth, Reconciliation and National Unity Commission (TRNUC) as a witness, primarily in the cases of John Gouffe and Joseph Edward.

The president also provided some insight into the deaths of Simon Desnousse, Mike Asher and Dave Benoiton, as well as in the political landscape at the time.

Comparing the country’s reconciliation process to that of post genocide Rwanda, President Ramkalawan further took the opportunity during the hearing to urge perpetrators to be brave and come forward to provide victims and families with the truth.

With only 15 months left in its mandate, the TRNUC has continuously called on these perpetrators to come forward but many are hesitating to do due to the fear of being ostracized by their community, reprisals and having to face legal consequences, although TRNUC has the power under its Act to provide them with an amnesty.

To assuage this fear, President Ramkalawan affirmed that the state will not and does not have the ability to intervene with any amnesty given to perpetrators by the TRNUC.

“There is no point in asking someone to come forward and speak to the commission, be given amnesty and then being threatened by the state afterwards, it would defeat the whole purpose of this commission.”

“The aim of this process is to ensure that we get the truth and reconciliation which will allow us to live in unity – this is what we want. If we are unable to achieve these, this country will not move forward,” stated President Ramkalawan.

Forgiveness, he continued, is one of the cornerstones of Christianity but it is often difficult for people to practice it and forgive each other.

Given that almost a third of TRNUC’s cases regarding victimisation under the one-party regime includes the forcible seizure of land by the government, President Ramkalawan noted that the current government will have to find innovative ways to ensure that this does not become a financial burden to the taxpayers.

This includes giving back the properties to the original owners if they have not been developed, or at least part of the property that is yet to be developed,  and other non-monetary compensations.

The minister responsible for lands, Billy Rangasamy, has been tasked with compiling a list of land that have been seized by the SPUP/SPPF government to identify properties that have not been developed thus far.

President Ramkalawan did not miss out to point out that one of the country’s greatest challenges is the lack of an efficient police force, a present issue that remains the vestige of the country’s troubling past.

“Even to this date, the police force is not as effective as it should be and this is one of the major complaints in Seychelles – it seems that this virus is still with

them and we have to find a way to get rid of it,” he told the commissioners.

President Ramkalawan was called in yesterday to provide his witness account in the case of John Gouffe, in which Mr Gouffe alleges that he was physically assaulted and beaten by three Police Mobile Unit (PMU) officers in 1993, on the exact day the multiparty state was announced by former President France Albert Rene.

At that time, Mr Gouffe was a member of the Parti Seselwa, the opposition party which preceded the Seychelles National Party (SNP) and which has been established by President Ramkalawan and other activists who sought for a more democratic Seychelles.

Mr Gouffe claimed that President Ramkalawan assisted him when he was beaten up by the members of the PMU because of his affiliation with the opposition.

President Ramkalawan explained that Mr Gouffe was involved in the distribution of the opposition party’s pamphlets.

“One day, Linda (the president’s wife) and I were sitting on the verandah where we resided at Bel Eau, it could have been at round 8pm. We heard his pickup driving up really fast and a vehicle was right behind him. He jumped and called for me ‘Priest, priest’ so I asked what was going on. He replied that the PMU was chasing after him and surely there were two officers behind him. John came inside and the PMU officers said that they need him and that John is being arrested – John was scared.

President Ramkalawan had a good rapport with the commissioner of police at the time, Anthony Camille, and hence he urged Mr Gouffe to go along with the PMU officers while he got everything sorted out with Mr Camille. Mr Camille noted that he would do the necessary for Mr Gouffe to be released from police custody and make sure that Mr Gouffe returns home safe and sound.

President Ramkalawan said a few hours later he received a call from John, stating that he had been released and to come meet him at the PMU camp at Petit Paris.

Once President Ramkalawan reached Petit Paris, Mr Gouffe informed him of the beatings and mistreatment he received at the hands of the PMU officers. Following the beatings, Mr Gouffe was allegedly threatened by Andre Quilindo, officer in charge of the PMU, who told him that this was merely the beginning and there was more to come.

The president noted that he accompanied Mr Gouffe to the casualty where he was seen and treated by the doctor but nothing else came out of this incident.

He said that he hanged on to Mr Gouffe’s medical paper which listed down his injuries but that this document, along with various other documents, got lost during his numerous house moves.

When asked why Mr Gouffe did not bring this incident to the courts, Mr Ramkalawan explained that it was almost impossible back then to bring a case against the police or other authorities and it would have been highly improbable for them to receive justice since the judges were influenced by the authorities of the state.

President Ramkalawan was also a witness in the case brought by Joseph Edward who claimed that, in 1989, Mr Ramkalawan took photographs of injuries which Mr Edward had sustained as a result of a brutal beating by soldiers following his escape and recapture.

Again, Preisdent Ramkalawan noted that the photographs taken of Mr Edward’s injuries, which included gruesome wrists bruising caused by handcuffs that were too tight, were lost throughout the years when he moved houses.

He however noted that the TRNUC could potentially still access the footage of when Mr Edward and other escapees of the Grand Police prison were brought back to Mahé, broadcasted by the Radio Television Seychelles (RTS) which is now the Seychelles Broadcasting Company (SBC).

“What we saw on this footage was already terrible – the soldiers did not make the prisoners enter the army vehicle properly but they were thrown inside the transport […] we were all shocked at this mistreatment.”

RTS also reported that Dave Benoiton was shot by soldiers during the operations conducted to retrieve the escaped prisoners. Although he survived this shooting, Mr Benoiton would later lose his life to a bullet shot in his head and Mr Ramkalawan yesterday noted that this had been an execution.

Following his release from prison, Mr Edward and a few other ex-prisoners met with President Ramkalawan where they recounted their mistreatments at the Grand Police prison, including having to sleep on pebbles and having salt water thrown on them which burned as they had sustained injuries.

As a priest in the Anglican diocese, President Ramkalawan brought these information to the attention of his fellow clergymen.

The second hearing of the day saw a new complainant, Derick Dias, who witnessed the start of the 5th June 1977 coup d’etat when he saw a man being dragged to the police station. The police officer fired two warning shots requesting the onlookers to disband and go home.

Mr Dias said that he was told by Percy Dingwall to go back home at Bel Air or else he might be killed.

Mr Dias also noted that he had been friends with Simon Desnousse and Alton Ah-Time, and he had been involved with the Mouvement Pour La Resistance (MPR) to some extent.

“I met with Gerard Hoareau and I made some leaflets and things like that which we distributed at night,” he explained.

Upon the disappearance of Alton Ah-Time, Mr Dias was informed by Mr Ah-Time’s mother that President Albert Rene had told the Ah-Time to go ask of their son’s whereabouts from Mr Dias.

In 1986, Mr Dias was arrested for an alleged arson case at Au Cap but he noted that this allegation was fabricated. He was subsequently released without any charge.