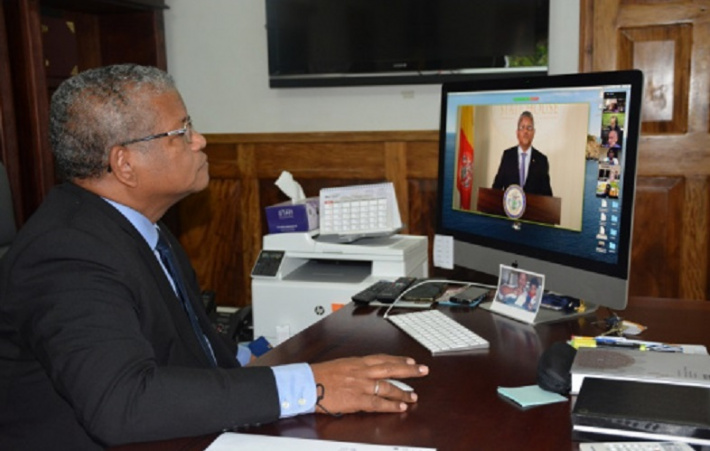 This conference, which brought together leading Roman Catholic and Anglican experts, was held under the theme ‘Building Solidarity, Defending Justice: Challenges and Opportunities for Insular Peoples’. It focused on the plight of island peoples in the face of climate change and other dangers.

During the live virtual event, in his capacity as the leader of an insular State and as an ordained and practising Anglican priest, President Ramkalawan underlined how small island states have experienced the adverse effects of global climate change and the importance that its people attach to the protection of the environment.

“Small island states seek recognition and it is heartening that the theme of this online conference includes the words, ‘challenges and opportunities for insular peoples’. Too often, simply because we are small, we are ignored on the world stage. But, as I will show, we share the unique experience of being islanders surrounded by the great seas that cover most of the planet. And, living in close proximity one to another, our peoples have gained a keen sense of the importance of community, of finding ways to co-exist and to respect our precious environment, across our limited land areas as well as at sea,” said the President.

President Ramkalawan referred to Pope Francis’ Encyclical Letters Laudato Si’ and Fratelli Tutti, as a form of inspiration to this conference to make a reflection on the present state of the world.

“Humanity has made so much progress in many ways. Yet new technology and unprecedented material wealth in global terms have not yielded the kind of utopia we might have expected. Too many of our fellow humans still live in poverty, and are oppressed in other ways too; our environment has been degraded without thought for future generations; and not a day goes by without hearing of conflict in one part of the world or another. That, very sadly, is where we are now.”

He continued, “One can only be inspired by the way Pope Francis looks at humanity and the challenges we face. It is obvious that there has been a constant manipulation and deformation of concepts such as democracy, freedom and justice. Selfishness and indifference have pushed humanity in the opposite direction of building a more fraternal world where we support each other instead of looking down on my neighbour. We are englobed by so many negatives that we forget we are all on the same Titanic and that the iceberg staring us in the face will destroy all of us. Based on that we are all religiously called to be part of a vision of rebuilding our communities as we patch together a broken world.”

In relation to Seychelles as a small island state and what examples it can offer, President Ramkalawan spoke about how Seychelles values sustainable development of its ocean. Furthermore, he also spoke about the human history of Seychelles, the mix of ethnic origins has been harmonious. In addition to that the President referred to the Preamble of the Constitution of Seychelles which he stated is pertinent to the theme of this conference.

“In a nutshell, we have encapsulated the many elements that are essential in building the ‘Fratelli tutti’ Pope Francis aspires to. We are in it together, insular states, landlocked countries and sea bordering ones. The human race, created in the image of God, marches on with hope. Seychelles is not alone. We are one of fifty or so similar jurisdictions in various parts of the world, the main clusters being in the Caribbean and Atlantic, in the Indian Ocean and in the Pacific. Traditionally, geographical dispersal has made it difficult to promote common interests but this problem has been eased by vastly improved communications (of the kind that is enabling this international conference).”

The President also highlighted the increased vulnerability to the adverse effects of removing important resources in the ocean and in destroying the forests.

“The voice of these small states can now be heard, and loudest of all is the call to mitigate climate change, which in some cases threatens the very existence of low-lying islands. There is also, in all that they say, a constant emphasis on sustainability. Development of these islands cannot come at any cost: it must be sustainable,” said President Ramkalawan.

“Oceans are beautiful. But are we respecting them? The pillage that is happening without proper awareness that removing all the resources will lead to dead oceans will destroy our existence. I’m scared when I realise that even with scientific knowledge at our disposal, we are simply not following the forecast. We condemn ourselves to further destruction when we tear down forests, change the course of rivers and massacre species to a state of extinction. Humanity has to change course or else we are headed for the iceberg.”

The President echoed the need to listen to the young generation who study and advocate the preservation of the environment.

“Each of the island states has its problems but are also models of exemplary practice. In my own region, for instance, each of small island states now has its own university. Some of these places of learning were formed barely more than a decade ago. Invariably, they are small institutions, reflecting their population catchment, but all can point to the enthusiasm of young people who want to improve their own life chances and those of their countries. There is hope embedded in this inspiring trend. Thank God for the spirit of youth who see knowledge, protection of the environment, peace and solidarity as basic tenets of living. They are the ones disrupting old destructive cultures. We have to listen to our youth,” said President Ramkalawan.

He concluded, “No island is too small to be a part of this endeavour, no country too large to claim a monopoly of ideas. Let us continue with humility but also with greater determination in our joint efforts to secure a better world, one which is fair and where all humans and nature feel as one. This ecumenical dialogue shows how it can be done.”

The full speech of President Ramkalawan can be read at:  https://www.statehouse.gov.sc/speeches/5191/president-ramkalawan-addresses-conference-focusing-on-the-plight-of-island-peoples-in-the-face-of-climate-change-and-other-dangers 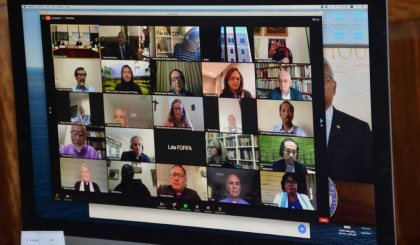