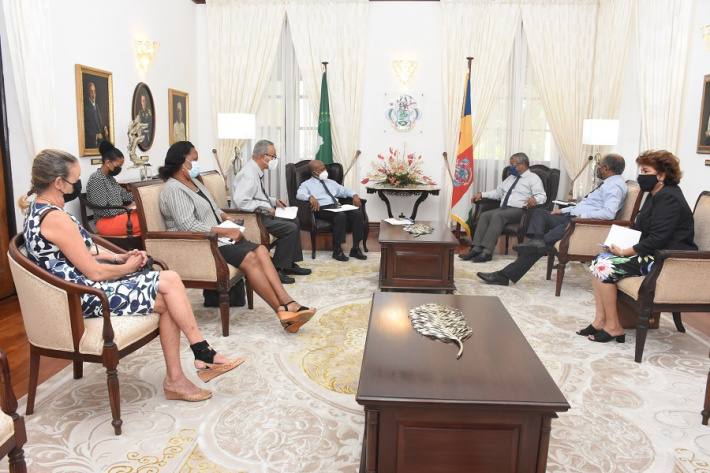 Members of the Constitutional Appointment Authority (CAA) yesterday called on President Wavel Ramkalawan to discuss issues pertaining to the authority and the changes that can be made to improve its efficiency.

The five members of the CAA – Michel Felix, Willy Confait, Simone De Comarmond, Marie Nella Azemia and Annette Georges – had previously requested for an appointment with the President and were grateful that they finally got the opportunity.

After the courtesy call, Mr Felix, who is the chairperson of CAA, said that the discussions were broad, covering an array of topics, the most prominent of which being amendments to be made to three sections of the constitution.

“We discussed with the president a bit of everything, but the main points were certain amendments that will be made principally to article 134, concerning the courses of action taken when there are complaints about Judges. Then we have section 45 of the Information Act and Article 139 which are also to be amended,” stated Mr Felix.

He further explained that article 134 is a bit too rigid and thus CAA is looking to amend it in a way that other disciplinary action is taken upon judges before they are taken to the tribunal, as the article currently states.