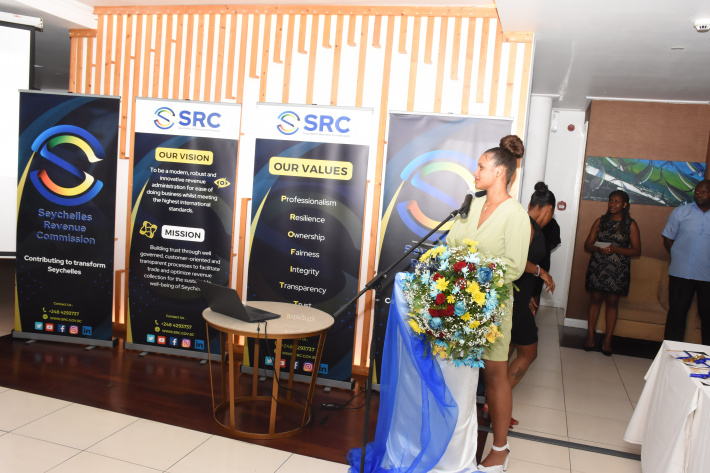 Unveiling of the commission’s new vision, mission, values and motto. Also featured is the new logo

The Seychelles Revenue Commission (SRC) has launched its new strategic plan outlining the commission’s strategic priorities and roadmap for the period 2023-2025.

In a ceremony held at Labriz Gastro Lounge yesterday afternoon, the chairperson of the Commission’s board, Chrystold Chetty, handed over copies of the strategic plan to President Wavel Ramkalawan, Vice-President Ahmed Afif, the Minister for Finance, National Planning and Trade, Naadir Hassan, among other guests.

Speaking to the media, the SRC’s Commissioner General, Veronique Herminie, said the plan, prepared using the bottom up approach, features the aspirations of all SRC staff, their reviews and feedback on past performance as well as suggestions for future improvement.

She added that it reflects the broad lines of the National Development Strategy 2023-2025 and the Strategic Plan of the Ministry of Finance, National Planning and Trade.

It also entails new vision, mission, values and motto, which were also unveiled during the one-hour ceremony.

According to Mrs Herminie, they align with SRC’s new direction to foster trustful and engaging relationships with all stakeholders.

“I am happy with the turnout especially of the stakeholders, where the president and vice-president have graced us with their presence, an indication of how important SRC’s role is for the country and government’s operations. With regard to our staff I sense an enthusiasm among them and as mentioned we have used the bottom up approach and engaged our staff to participate and contribute with their aspirations, and what they want SRC to achieve,” said Mrs Herminie.

Yesterday’s event also saw the introduction of the new online registration platform called ‘Seychelles Tax Portal’, as well as the unveiling of the new logo and improved website.

The Seychelles Tax Portal is already active via www.tms.gov.sc and can be accessed by taxpayers registering their business activities with SRC. They will also be able to obtain their tax identification number within 24 hours online after registration.

SRC’s revamped website is also providing additional information to facilitate customers’ enquiry and can be accessed at src.gov.sc.

When addressing the guests, Minister Hassan said with SRC falling under his ministry, he was happy to see the progress made so far and witness the launch of the first phase of the IT system redevelopment, the ‘Seychelles Tax Portal’.

“The new ways of interacting with SRC (network connectivity permitting) have taken into consideration the needs and concerns raised over the years by taxpayers and stakeholders as well as the issues faced by SRC’s own personnel.

What is coming following today’s event should therefore facilitate the efficiency with which SRC delivers its services for optimum revenue collection and reduction in compliance cost of businesses,” said Minister Hassan.

He also welcomed the new Strategic Plan for 2023 – 2025, along with the rebranding which he said was a holistic approach in repositioning the organisation “to better play its role in supporting the economic development of Seychelles as its new motto reads – ‘Contributing to transform Seychelles’.

Yesterday’s ceremony was also to thank and award prizes to the winners of the logo and name building competitions.

Velma Cafrine, winner of the logo competition, has designed a creative ribbon style sketch depicting the acronym of SRC in colours reflective of the Seychelles flag.

For her part, Verna Lesperance, is the winner of SRC’s name building competition, with ‘Maison Manglier’, which she said was inspired by the droves of mangroves found alongside Bois De Rose avenue where the SRC building will be built.

Meanwhile, Mrs Herminie said SRC is not expected to reach its target set for 2022, which was R7.5 billion but since this year is considered a recovery year, 2021 was not a fully active year for businesses.

“Most of our returns have been lodged and we have noticed a decrease. As of November 24, we have been able to collect R6.2 billion, which is short by over a billion rupees to meet the target. So we expect to end the year with R6.9 billion, so meaning for the first time we will not be able to meet the target.”

Mrs Herminie said this is not discouraging as they are still exceeding the 2021 target, which was R6.5 billion. 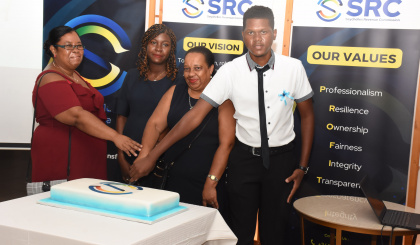 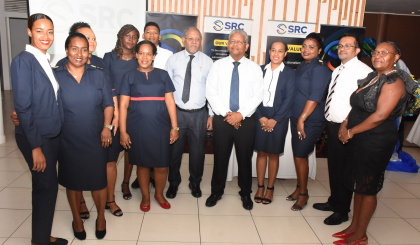 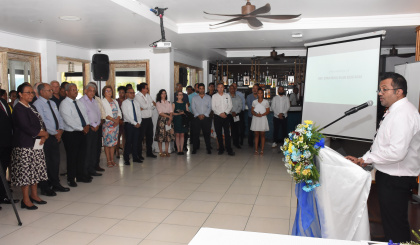 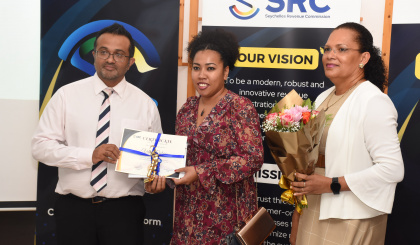 Winner of the logo competition, Velma Cafrine, receiving her prizes from Minister Hassan and Mrs Herminie