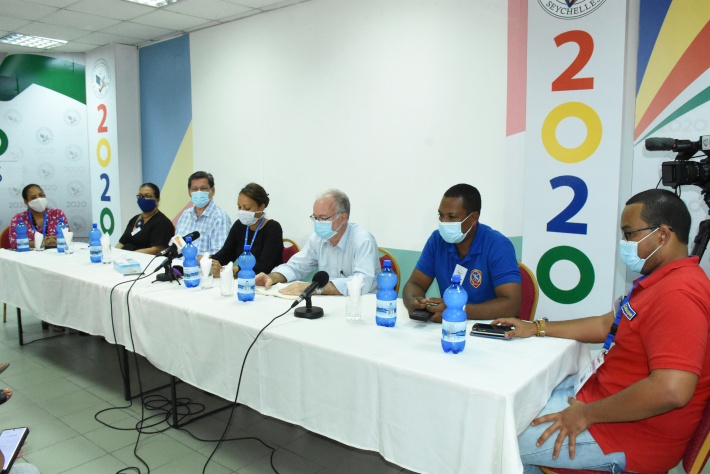 Around 5,000 people have been accredited by the Electoral Commission of Seychelles for the 2020 general elections which start today and will end on Saturday October 24.

Late yesterday afternoon, the Electoral Commission of Seychelles (ECS) met with media representatives one last time before voting starts. The meeting, chaired by the chief electoral officer, Manuella Amesbury, was attended by the chairperson of the Electoral Commission Danny Lucas and the other members, a representative from the department of risk and disaster management (DRDM), Public Utilities Corporation, health services and the Seychelles Fire and Rescue Services Agency (SFRSA).

It is now confirmed that 923 staff will be working for the two elections ‒ presidential and legislative.

“We have completed our accreditation process and around 5,000 people have been accredited to work for the presidential and legislative elections. Those include staff, observers, representatives of political parties, media personnel and service providers. In terms of facility, there are two rooms in each school with three streams, with the exception of Anse Etoile school. These elections are happening at an unprecedented time and much emphasis has been put on making these elections safe and credible,” explained Mrs Amesbury.

Mrs Amesbury also talked about the work that has been done in the schools in order to get them ready for the polls and she reassured everyone that everything is on track and all stations will be ready on time.

PUC chief executive Philippe Morin explained to the press the various precautionary measures that have been put in place to prepare for the elections.

“We are conscious that our services are crucial as the election process starts. On the production side, we have checked all our equipment in the polling stations that will be used and all of them are working correctly. As from Friday we will increase surveillance in order to minimise the mistakes and reduce inconveniences. Each voting station has a generator as a back-up if anything goes wrong. We have also checked the water distribution in these facilities and so far things are good.”

“As soon as the dates were announced, our work has intensified and adding with Covid-19, extra measures have been taken in order to set up how the polling stations will work. On the days of elections, the national operation centre will be fully operational and we will provide whatever support is required, whenever response is required. Right now all our partners are on alert and we will be on standby as of today (Thursday) till the end of elections.”

Seychelles Fire and Rescue Services Agency (SFRSA) spokesperson Jones Madeleine said they have been working with the ECS for quite some time and they visited all the polling stations and also the headquarters of the ECS to make sure the areas are safe.

“In terms of fire safety, we have made sure the areas are ready but we can never eliminate the risk of fire. We also had a chat with different officers to educate them on the various safety measures they need to take if ever there is an incident. Our role stays the same and for the elections we are decentralising our services in order to attend to any incident. We are also making sure that all our officers are ready.”

Public health emergency operation committee representative Colette Servina noted that they have been working with the EC to guide and help them in putting in place precautionary and safety measures for the staff.

They also helped with information on people who are coming to vote and the safety measures they need to take.

Mrs Amesbury stated that all staff working in the special stations at the Berjaya Beau Vallon Bay and Baie Lazare will be equipped with protective gear and will also be tested after having worked in these stations. They are being helped by the department of health. No media will be allowed at the two special stations.

“We cannot ask the electoral officers to give the journalists unfettered access to the stations. It is also false to say that the journalists will not have access to the polling stations for interviews. It is in the interest of the population to have a good coverage of the elections and the decision stays with the electoral officers as we need permission of the person to be filmed or photographed. We have always cooperated with the press and it will be the same for these elections!” stated Mr Lucas.

Mr Lucas also informed the press that the presidential election results will be announced first followed by the results of the legislative election.

Today, Thursday October 22, 2020 Seychellois will vote in special stations around the country.

English River Creche: The first station at English River Crèche will be open from 7am to 4pm and will be mainly for essential workers as defined in the law and for people who are travelling.

Remand centre, Bois de Rose: The station will be opened from 8am to 12 noon and all the people who are in remand irrespective of their districts will vote in this station.

Berjaya Beau Vallon Bay quarantine centre. The station will be open from 8am to 12 noon.

Baie Lazare community centre: The station will be open from 9am to 4pm and all those working in some hotels in south Mahé will have access to this centre under certain conditions.

Baie Ste Anne primary school: Open from 7am to 12 noon. This station will welcome all those working on Praslin coming from Mahé and essential workers.

Silhouette community centre: From 9am to 1pm for voters coming from Silhouette and North Island.

Poivre: From 10.30am to 11am for voters on Poivre, Remire, Darros, Desnoeufs and other neighbouring islands.

Farquhar: From 10.30am to 11am for voters on Farquhar, Alphonse, Desroches, Providence and St Pierre.

Climate change: the EU is ready to assume its global responsibility |23.08.2021