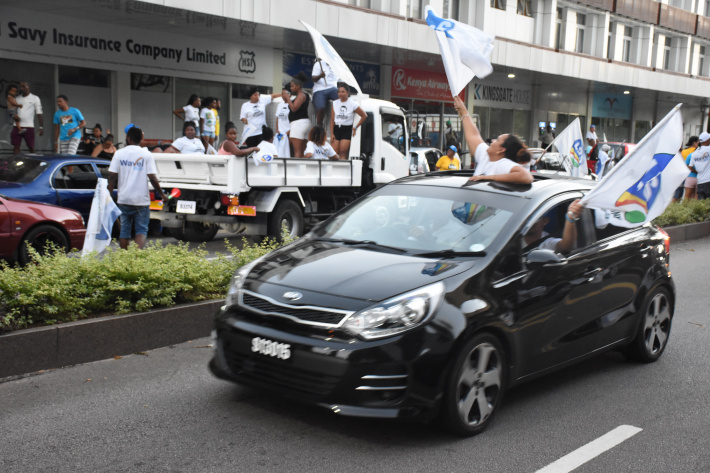 Well before official election results were announced on Sunday morning, supporters of newly elected President Wavel Ramkalawan of Linyon Demokratik Seselwa took to the streets of Victoria to celebrate the historic victory.

Lining the Independence Avenue, leading up to the State House Avenue, supporters donning their favourite party apparel danced and sang along to the once opposition party’s anthems, chanting in support of Mr Ramkalawan, who on his sixth attempt led his party to a 54.9 percent victory in the general elections.

By 5.30am and with the announcement of provisional results of Linyon Demokratik Seselwa’s (LDS) win in numerous districts, supporters started making their way to Victoria for the celebrations which continued on well into Sunday evening. Cars adorned with stickers, posters and flags bearing the LDS logo, slogan and Ramkalawan’s face hung from every corner and vehicle while the supporters all wore smiles of joy, accomplishment and relief, and some even shed a tear.

As more joined the already large crowds from all corners of Mahé after the results were officially announced by the chairperson of the Electoral Commission of Seychelles (ECS), Danny Lucas, after 10am, the cacophony of blaring car horns and party anthems grew ever louder, and more rallied around the iconic clock tower, a faint reminder of the progress and accomplishments of the country over the decades, within the political context.

As Mr Ramkalawan and his vice-president Ahmed Afif made their way to State House for a meeting with outgoing President Danny Faure at around 1.30pm, the celebrations and roars of supporters intensified, moving closer to the gates of State House. To the delight of supporters, President elect Ramkalawan and Mr Afif drove through Independence Avenue to casually greet supporters upon concluding the meet.

While the main celebrations were centred in town, many preferred to remain at home and within their communities and districts to celebrate. LDS anthems echoed all over the island where small groups of supporters were gathered. Others preferred to drive around the island motorcade fashion to catch a glimpse of the action.

Supporters on inner islands also hosted their own celebrations. An impromptu motorcade on Praslin marked the landslide victory.

Celebrations continued yesterday, albeit on a lesser scale as the country gears up for the new chapter in its political history. 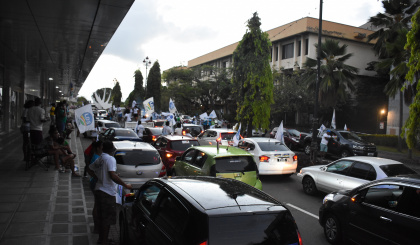