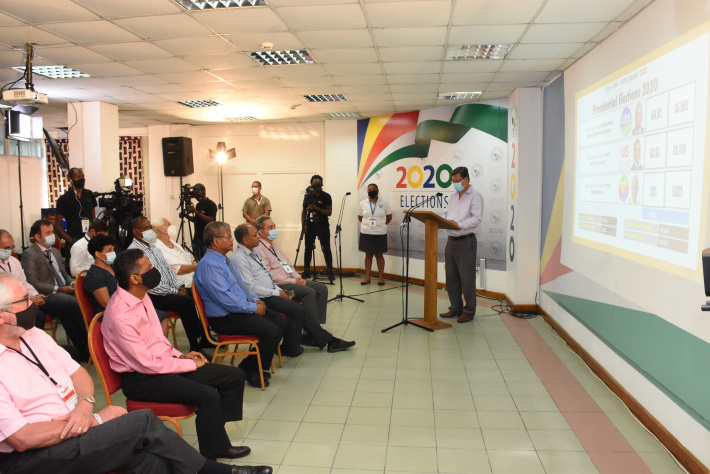 Former leader of the opposition in the National Assembly, Wavel Ramkalawan, of Linyon Demokratik Seselwa, won a historic landslide victory in the presidential election to become the fifth president of the Republic of Seychelles, dethroning the well-established ruling party.

The election took place from October 22-24 alongside the National Assembly election in which Linyon Demokratik Seselwa (LDS) secured a staggering two-thirds majority.

In what some have described as a long time coming triumph, President Ramkalawan received 54.9% of valid votes over his main contender former President Danny Faure standing for United Seychelles (US) who garnered 43.5% of the votes. The third presidential candidate for the 2020 presidential election, One Seychelles’ Alain St Ange, won 1.6% of the votes.

It is the first time that an opposition party claims a presidential victory, while defeat in any presidential election held since the reinstatement of multi-party democracy was an unconceivable word for United Seychelles, formerly Parti Lepep/SPPF/SPUP. The party had been in power since 1977, although it conceded its first defeat in the 2016 National Assembly election in 2016.

Thousands of LDS supporters cheered and celebrated on Sunday morning when the chairperson of the Electoral Commission, Danny Lucas, officially made the announcement, presenting President Ramkalawan with the affidavit certifying his victory.

However hundreds of giddy LDS supporters had already taken to the streets on Mahé, Praslin and La Digue before dawn on Sunday morning as results from each district gradually trickled in, making it more and more obvious who was going to win the seat at the State House as the hours wore on.

The win was made even more significant given that it was President Ramkalawan’s sixth time vying for the post. He had narrowly missed out in 2015 with 193 votes separating him from the Parti Lepep opponent.

In his victory speech, President Ramkalawan that his new administration would always welcome the contribution of all of Seychelles’ children, including that of outgoing President Faure.

“Mr Faure and I are good friends. And an election does not mean the end of one’s contribution to one’s motherland. Our motto is Seychelles for all her children. So, President Faure, I would like to thank you for all the work you have done for our country. I look forward to your continued contribution to the development of our homeland,” he said.

“The experience we have been through these past few days and the results we got, I would like to firstly say that we should not look at it as a victory for a political party. Through the results, the people of Seychelles give us a lot of responsibility,” said Mr Ramkalawan when thanking his supporters.

In response to questions from the media in regards to his cabinet of ministers, President elect Ramkalawan said that it would comprise a mixture of experienced politicians and professionals.

As an Anglican priest, President elect Ramkalawan said that he hopes to retain his priesthood, with the blessing of the Archbishop James Wong.

On his part, outgoing President Faure graciously conceded his defeat to the opposition party and guaranteed a peaceful transition of power.

He highlighted that he would remain in Seychelles to provide his contribution since “Seychelles is greater than us all”.

The outgoing president and the newly elected president met at State House on the same day, in the afternoon, to discuss the transition of power and other issues.