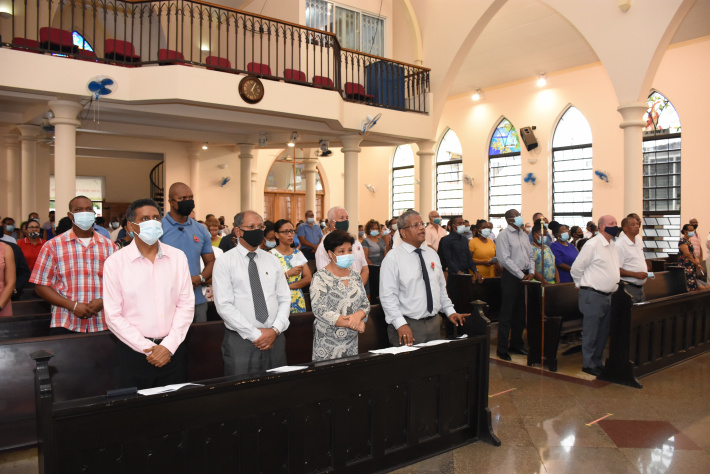 Newly appointed government officials, candidates who contested the 2020 general election and members of the Electoral Commission gathered at the St. Paul’s Cathedral yesterday afternoon for a thanksgiving mass.

The special post-election mass was organised by the Anglican diocese to celebrate, in parts, and give thanks to the peaceful election process and transition of power.

The one-hour long ceremony was led by Archbishop James Wong assisted by priests from all the Anglican parishes across Seychelles, from Reverend Christine Benoit of Anse Royale’s Holy Saviour Church to Reverend Simon Fred from Praslin.

In his homily, Archbishop Wong highlighted the efforts undertaken by various faiths before and during the election to reinforce prayers for peace and harmony.

He noted that Seychellois were relatively respectful of each other bar some biting words that were exchanged.

Nonetheless, Archbishop Wong congratulated the country for the overall peace, respect and solidarity that were observed during these tense periods.

National unity should not merely be a concept, the Archbishop continued, but a notion that should be practiced and lived by all Seychellois.

In that regard, Archbishop Wong took the opportunity to commend the country’s leaders, past and former, for setting a striking example of national unity.

“Through your friendship and fraternity you are showing the supporters, people from the grassroots that we should not hold any bitterness and hatred,” said Archbishop Wong.

“The people should follow the example of the leaders, let us together build a strong, united nation in which love and honesty reigns. Only a united country can successfully take on the challenges of Covid-19,” he added.

The scripture read by the First Lady taken from Colossians 3 and the gospel reading from John 15 both spoke of the peace of Christ, the importance of love and unity.

All leaders and persons who attended the service were commanded to ‘love each other’ and to go and ‘bear fruits that will last’.

The ceremony concluded with the clergy blessing all newly appointed leaders followed by the presentation of Bibles, as symbols of God’s peace, to the president, vice-president, speaker and former president. 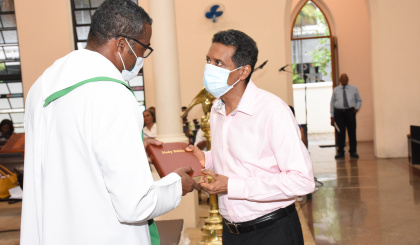 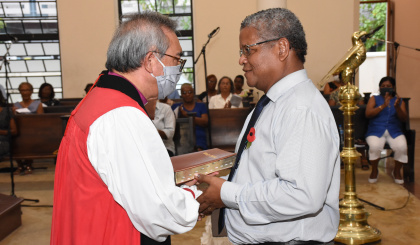 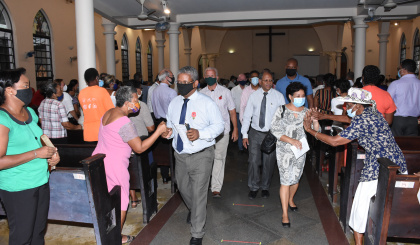